On June 21, the scientific and technical conference for non-rocket near space industrialization was held in Belarus. It was attended by inventors, representatives of academic and scientific circles, public organizations from Belarus and foreign countries, including the UK, Germany, Peru, India, United Arab Emirates, Moldova, Russia, Ukraine, Latvia, Slovakia and Estonia. The first conference dedicated to the issues of space-free industrialization of space was held in 1988 and gathered about 500 guests from the USSR and abroad. After 30 years, this issue is even more relevant.

Participants stated: negative changes occur in the Earth's biosphere, caused by the activities of modern technocratic civilization. If we do not take drastic measures, we are all doomed to ruin in two or three generations.

The solution was proposed by the main speaker, Belarusian engineer and inventor Anatoli Unitsky, a member of the USSR Cosmonautics Federation, the inventor of the SkyWay string transport technology; dozens of countries around the world are now showing interest in this technology, including the UAE, where the project is included in the infrastructure development strategy. He spoke about his SpaceWay space program, the essence of which is to bring all harmful production into Earth orbit and begin the industrialization of space. Then the biosphere will be freed from the negative influence of the technosphere, and humanity will have unlimited space resources at its disposal. However, the traditional methods of space exploration are not suitable for this task.

"The existing rocket transport causes enormous damage to the environment and is economically inefficient. The geocosmic transport of the new generation should play a decisive role in the industrialization of space", said Anatoli Unitsky. 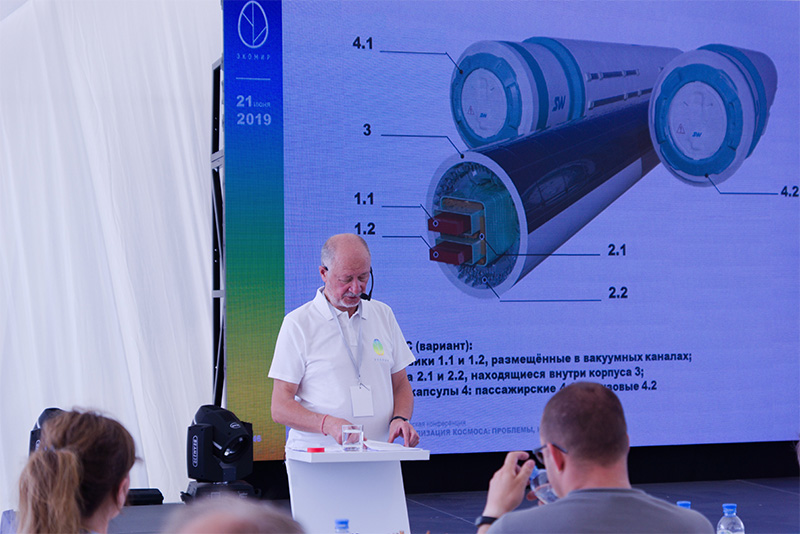 Anatoli Unitsky presented the GPV project (General Planetary Vehicle) — a geospace vehicle of the future, which will be advantageously different from modern rocket solutions in high speed, eco-friendliness (it works on electricity) and efficiency. In the future, GPV will be able to provide annual cargo traffic of millions and billions of tons between the Earth and orbit.

At the same time, the basic principles of GPV operation are quite simple. Anatoli Unitsky formulated them in 1982 in his article "Interchange, Space, Ring" published in the journal "Inventor and Innovator". The ideal transport would be one that uses only internal forces, says the inventor. That is why, it must have the shape of a ring.

Thus, the General Planetary Vehicle is a geocosmic aircraft covering the planet in the equatorial plane. The peculiarity of GPV functioning is that going into space is carried out by increasing the diameter of its ring and achieving at the design altitude (with passengers and cargo) the peripheral velocity of the body equal to the first cosmic velocity. At the same time, the position of the center of mass of GPV does not change in the process of going into space — it always coincides with the center of mass of the planet. The optimal internal driving force for GPV is excessive centrifugal force from a belt flywheel accelerated around the planet in a vacuum channel using a linear electric motor and a magnetic cushion to speeds exceeding the first cosmic one — up to 10—12 km/s, depending on the ratio of the linear masses of the body and the flywheel. This is not very high speed: it is thousands of times lower, for example, than the speed approaching 300,000 km/s, obtained on the same principles in modern charge particle accelerators. For the transfer of momentum and moment of momentum to the body of GPV when entering the orbit in order to obtain an orbital speed equal to the first cosmic velocity, a second belt flywheel is required, also covering the planet. 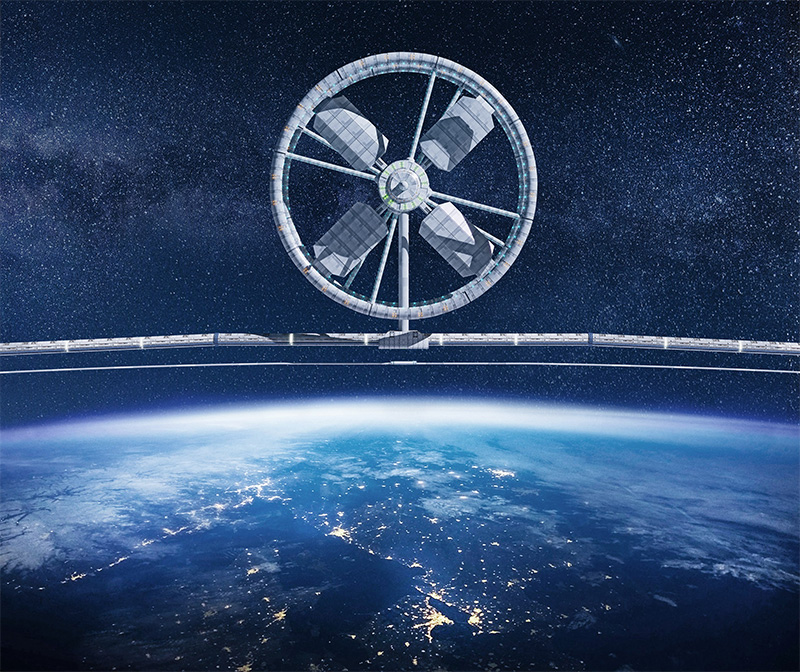 Separately, it should be said about the economic effect of using the GPV — the cost of delivering each ton of cargo to orbit will be reduced by a thousand times compared with a rocket and will be less than a thousand dollars per ton. To achieve what an GPV can do in one year, the modern world rocket and space industry will need more than one hundred thousand years. But the main thing is that civilization will get access to almost ideal conditions for technological processes: weightlessness, vacuum, unlimited raw materials, energy and spatial resources. In this way, the endless needs of humanity will be satisfied.

The construction and commissioning of the GPV is a super-ambitious task that will require cooperation between countries of the world, international organizations, leading world companies, research organizations and universities. 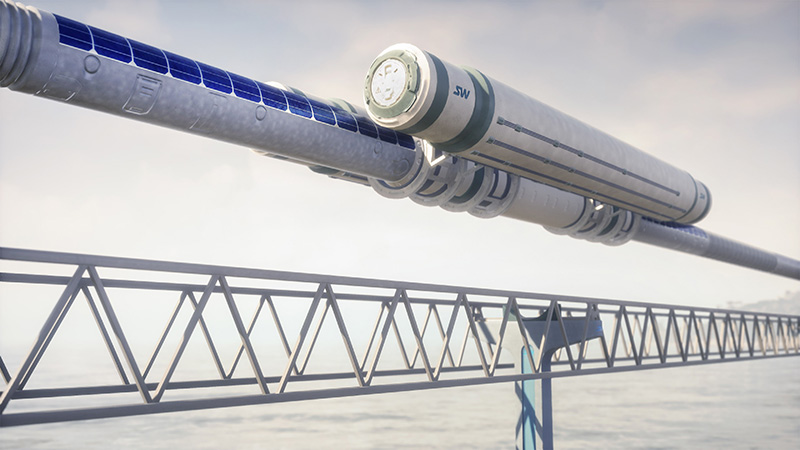 Anatoli Unitsky called the establishment of an international public organization to consolidate the efforts of the world community to ensure the sustainable development of the biosphere and the harmonious co-evolution of man and nature as one of the priority intermediate tasks on the way to industrialization of near space. This will be done over the next 2 years. The headquarters of the organization will be located in the United States. It is planned that over time it will join the UN as an expert on global environmental issues. 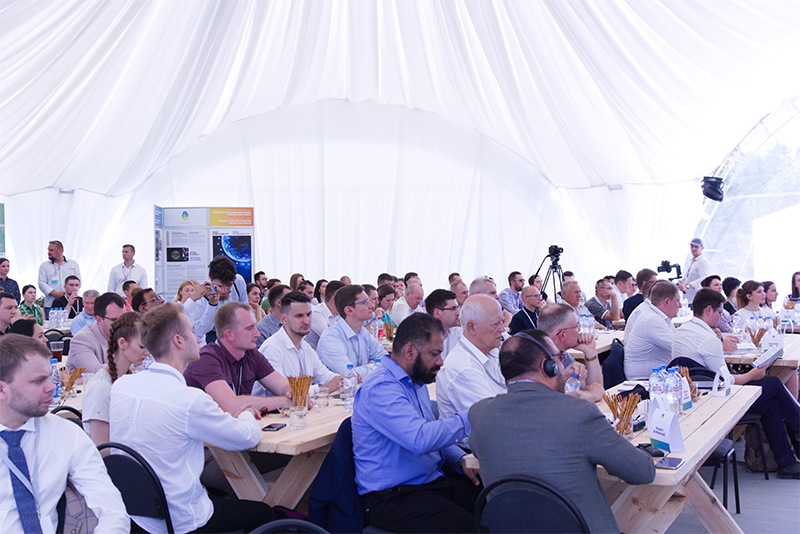 The participants presented the results of their research and scientific and practical work in the following areas: solving global problems of modern times with space means, the prospects for industrial development of near space, creating a general non-missile space vehicle, especially organizing large-scale cargo and passenger traffic along the Earth—Orbit—Earth, space settlements for 5 thousand people in orbit, etc.

Interest of participants and guests was caused by the reports "Features of the design of a residential space cluster "EcoCosmoHouse", "Features of international business cooperation within the framework of the SpaceWay program", "Description of the structural elements of the SpaceWay astro-engineering transport system" and others.

Based on the results of the conference a collection of scientific papers will be published. The next, third conference on the problems of non-rocket space exploration will be held in 2020 in the Republic of Belarus.