The road network in today's India covers more than 4.5 million kilometers. Over 200 thousand people die on these roads and over a million are injured as a result of traffic accidents. 'Rolled up' in asphalt and 'buried' under railway sleepers is fertile soil, equal in its area to the territories of three countries, such as Israel. On the territory ten times larger, soils along roads are degraded and contaminated with carcinogens. If this continues, approximately 20 mln people in India will have died and about 100 mln will have become handicapped with chances of premature deaths by the end of the century. This number of people, victims of automobiles, will be comparable to the population of a large country, such as for example the Russian Federation. 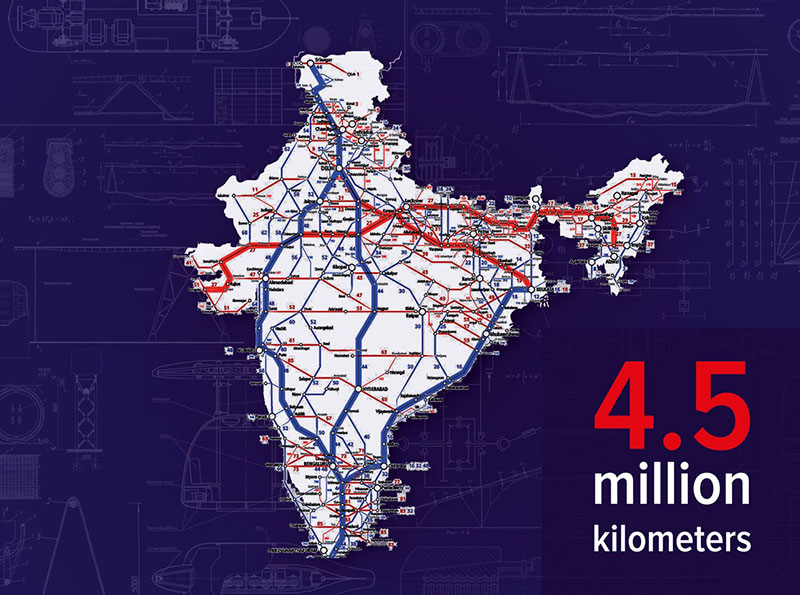 India is already moving in leaps and bounds towards fundamental, profound changes in the social pattern of its citizens. Such large-scale programs as "Smart Cities" is a measure of foresight on the part of the Indian leadership, of the desire to build a great future for the country.

As this panel discussion is devoted to the road map of the strategic development of the country, I would like to briefly outline the concept of the future development named "From Smart Cities to a Smart State", the basis for which is a network of smart linear cities built along transport communications of an elevated type. 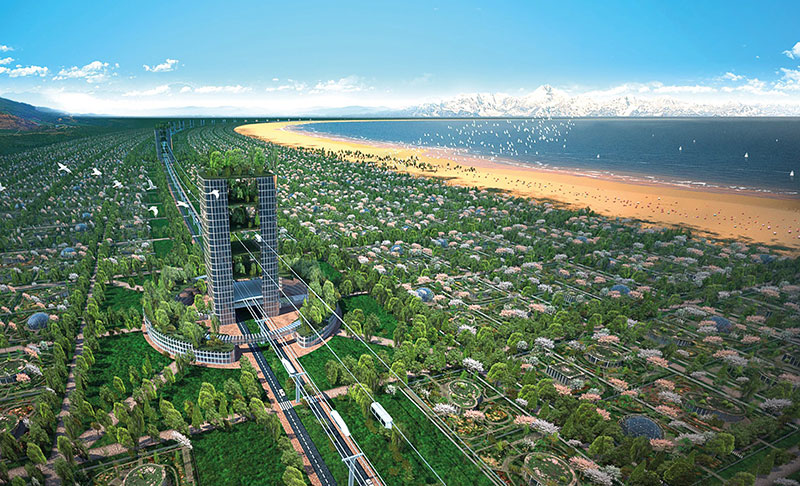 Smart Linear City is an entirely pedestrian city-cluster, stretching in length for hundreds of kilometers. A cluster about 1 km in diameter — a residential, industrial, educational, trade, sports or mixed one, with up to 6 thousand inhabitants — will be built in the logic of accessibility for pedestrians, i.e., within 500 m from the center. In the center, there is a dominator — a high-rise building with public establishments, through which transport, power supply and information communication lines pass — SkyWay, located at a height of 10 meters and more above the ground surface, i.e. on the "second level". Interchange stations to transfer from urban tracks (their speed — up to 150 km/h) to high-speed intercity air tracks (their speed — up to 500 km/h) and, potentially in the future, underground hyperspeed tracks located in forevacuum tubes (their speed — up to 1,500 km/h) are also placed in them. 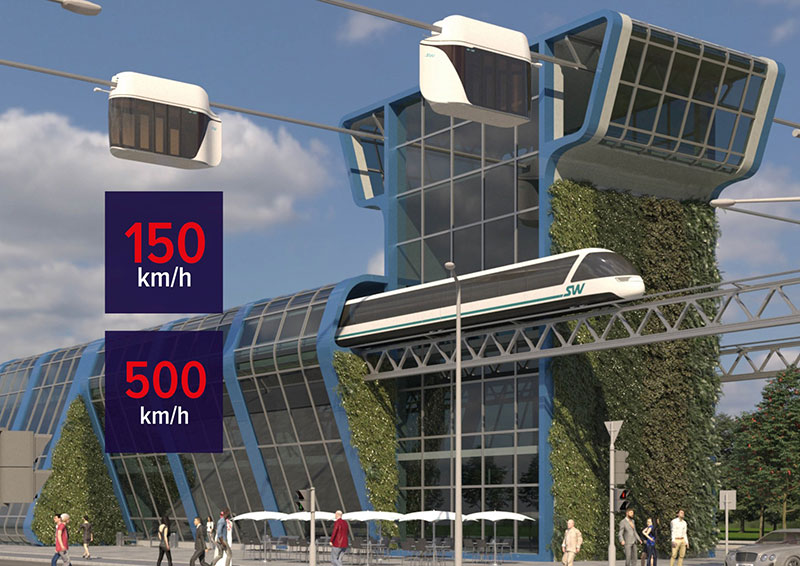 Every cluster is self-contained — it is provided with its own energy, water and food. It does not deprive nature of a single square meter of land — soil from under every building is transferred to a flat roof of the building, enriched with fertile humus, with a garden planted on it.

The houses are mostly single-storey, comfortable for living and budget-friendly for a family with an average income, or a middle-class family. A garden and a vegetable patch on the house roof will be enough to feed the whole family with healthy, even healing food. 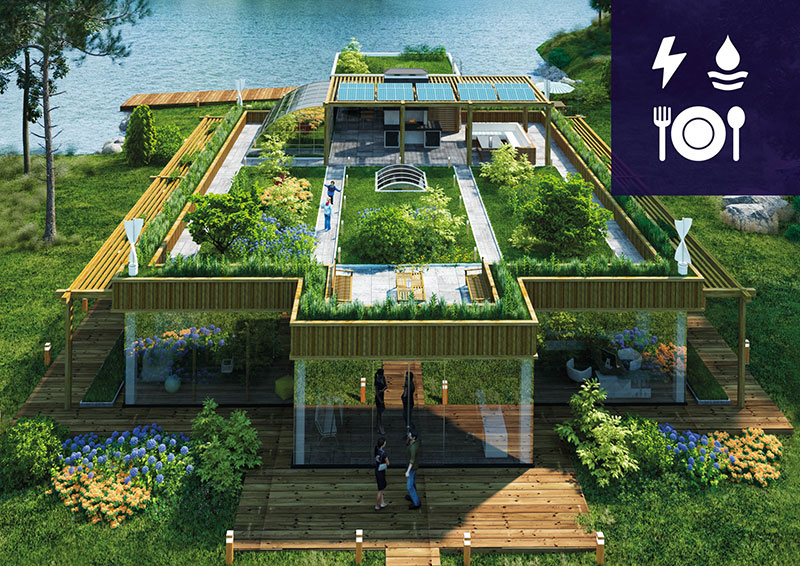 Every cluster is ecologically clean and fits harmoniously into the environment in all Indian natural diversity — in the mountains and forests, on fields, islands and sea shelf. All its waste is transformed in specialized bioreactors into humus — fertile soil — using special microorganisms, adding other balanced organic raw material, including coal, shale, peat. Using its waste transformed into soil, one person will be able to feed themselves and one more person; whereas one cow will be able to feed not only itself, but also ten more people.

A network of smart linear cities covering all the territory of India, including the Himalayas and the shelf of the Arabian Sea and the Bay of Bengal, 200 thousand km long, will occupy the area of 200 thousand square km (approximately 1/16th part of the country's territory), where over a billion people will be able to live and work in comfortable conditions by the middle of the century. The rest 15/16th part of the country's territory will turn into nature reserves and wildlife sanctuaries, with ancient landscapes restored.

There will be no traffic jams, smog or traffic-related deaths in such a pedestrian linear city. It will become possible for children to run barefoot not on asphalt, but on grass, and parents will not have to worry about their life. All population will be employed, mainly in services sector, including growing of natural food for their families.

The population will be healthy, with plenty of food, and will enjoy more free time to devote to creative activities and self-development due to a significantly shortened working day. Hundred millions of highly paid work places will be created here, required due to the increased domestic demand for 'single-storey' India.

As is the case with lifts in multi-storey buildings that are included in the cost of a square meter of accommodation, horizontal, and not vertical, lifts SkyWay will be built in smart linear cities and will be included in the cost of residential and infrastructure buildings and structures. With that, the cost of one square meter of accommodation in such cities built in a completely different, natural logic will be not more expensive, but vice versa — by 25—30% cheaper than in conventional cities.

Horizontal lifts SkyWay will be cheaper: by 2—3 times compared to highways, by 10—15 times compared to any roads of an elevated type — motor roads or railways, including high-speed, monorail and maglev. In terms of energy (fuel) efficiency, they have no analogues and are superior to railway transport (including tram and metro) by 2—3 times, superior to automobile transport — by 3—5 times, aviation and maglev — by 5—7 times. 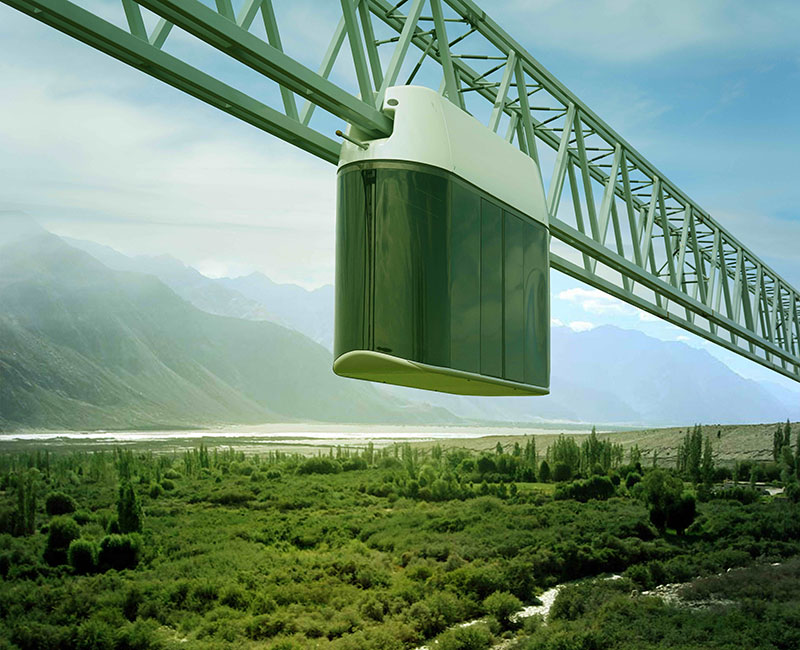 The resource intensity during construction, operation and repairs — metal, concrete, asphalt, earthwork operations and land acquisition — will be ten times less if compared to the implementation of any other transport and infrastructure solutions. SkyWay tracks of "the second level" are built for 100 years and practically do not require any maintenance. They are more resistant to natural phenomena, such as earthquakes, floods, tsunami, torrential rains, hurricane wind, as well as to vandalism and acts of terrorism, than any other conventional or ambitious transport system.

In its essence, the future vision of a Smart State proposed by the SkyWay is not a transport project, but an infrastructure and development one. Therefore, it can be entirely implemented at the cost of population of the country by creating domestic demand in all areas of economy — from agriculture and construction to machine building and electronics.

This programme can be implemented in stages by the year 2050. We are planning to start the first stage already this year in India, state of Jharkhand — it is the construction of a test cluster of a smart linear city and test sections of SkyWay transport systems. In addition, we are working on the concept of the Transport system for the Smart city in Dharamsala, state of Himachal Pradesh.

Thank you for your attention.