July 20, 2019 SkyWay EcoTechnoPark was visited by Steven Seagal — an American actor, film producer, screenwriter, film director, singer, guitarist, sheriff and martial artist (7th Dan Aikido) — with his wife Erdenetuya. The couple was accompanied by a titled powerlifter, a multiple Guinness Book record holder, one of the strongest men in the world, Kirill Shimko. 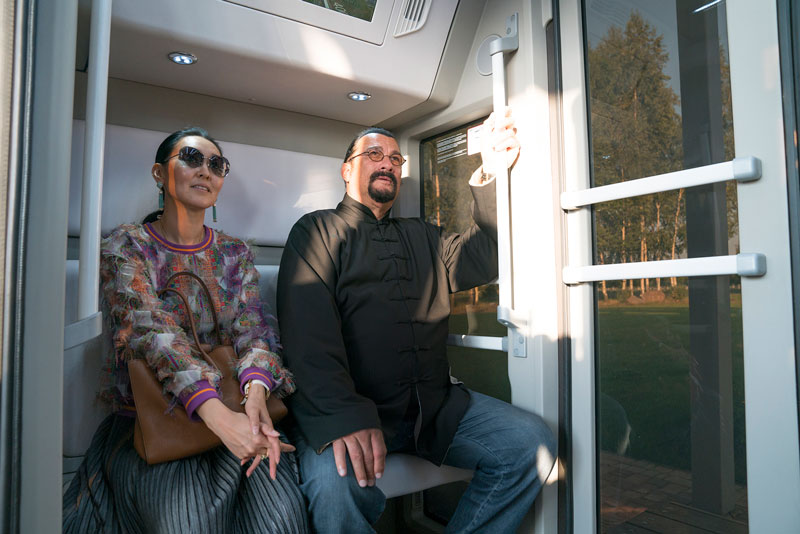 The Hollywood star has long been concerned about healthy lifestyle and environmental improvement, which is reflected in the work of Steven Seagal, starring in a number of films devoted to the fight against environmental destruction. Suffice it to recall the role of an expert on oil fires in the film "On Deadly Ground" saving the Eskimos from an oil disaster, in "Fire from Below" he was investigating the dumping of toxic waste, and in "The Patriot" Steven Seagal played a medical specialist trying to stop a lethal virus.

According to the actor, the desire to devote more time to such projects with the purpose of making the world a better place to live, and also to encourage more people to look at existing problems "the way we do" (a quote from an interview) was the main reason behind his visit to EcoTechnoPark.

Nadezhda Kosareva, General Director of String Technologies Co., conducted a tour of this center for testing, demonstration and international certification of Yunitsky String Transport. In addition to its key facilities, the guests got acquainted with several samples of rolling stock, rode in a unicar, highly appreciating the comfort, running characteristics of SkyWay transport and the magnificent view of the surrounding nature, which opens from a height of almost 14 meters.