Citizen of the World, citizen of Asgardia

Continuing to enjoy the benefits of industry without harming nature. This is the way of civilization development. But it is possible only through the separation of the biosphere and the technosphere in space, transfer of the latter into space. The program of creating a General Planetary Vehicle (GPV), which is being implemented under my leadership, is the only possible way to achieve success in the industrialization of space from the viewpoint of physics. Neither rockets, nor a space lift, nor anything else, with the exception of GPV, can technically provide sufficient cargo and passenger traffic for these purposes on the Earth-orbit-Earth route.

The implementation of GPV project will be a starting point for the transition of humanity to a new quality – formation of a space civilization. Today, most of us still find it difficult to imagine. The world is torn apart by wars between countries and corporations. None of the states can put the interests of the world community above their own. Nevertheless, some steps towards becoming a universal unity and a new consciousness are being taken right now, and I support them. This urged me to become a citizen of the world's first space state Asgardia. I took an active part in the life of the community of more than a million people. I have presented a visualization of the General Planetary Vehicle at the first art competition organized by the Parliament of Asgardia, becoming one of its finalists.

The contest was presented with a visualization of a General Planetary Vehicle, showing the moment of lifting this vehicle into orbit, as well as docking with elements of space industry. In addition, the concept of an Ecocosmodome with artificial gravity and a full-fledged ecosystem inside the Earth’s mini biosphere was demonstrated. In the future, people who serve the space industry will be able to live in such houses. Conditions in them can be even more comfortable than on Earth. Their construction, as well as the creation of other elements of space industry, will be possible due to the General Planetary Vehicle that can deliver materials to orbit simultaneously to create ten similar space houses with a mass of one million tons each. The main mass of such orbital houses is fertile soil, fresh and sea water for reservoirs and air for habitation of up to ten thousand people, as well as for an appropriate number of plants and animals. 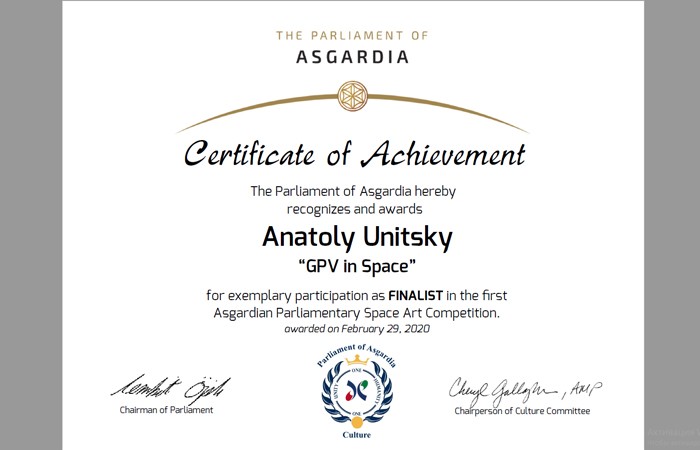